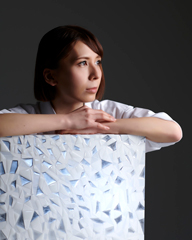 Tomoko Hokyo’s research involves tracing history to understand the present and the relationship between humans and nature, all based in the spirituality of Japan, where she was born and raised.

For Hokyo, who has loved to draw since she was a child, the act of drawing is proof that she is alive. In addition to painting, an important part of her life includes experiencing nature, studying history, and traditional Japanese culture. She spent her childhood with a curiosity about history and nature, which became an important starting point for her to understand her own connection to them.
Through her study of history, she uses her work to pursue the path to tomorrow, tracing the path that humanity and nature have taken, how they are connected to the present, and what kind of future the world is about to face.

Born in Chiba in 1984, Hokyo majored in traditional Japanese painting techniques at Joshibi University of Art and Design where she graduated in 2007. Her studies concentrated on the theme of Japan’s disappearing four seasons including changes to climate and the environment.
Upon moving to Kazakhstan in 2013, she was greatly influenced by the beautiful nature, culture, and religion which are so different from Japan. At the same time, her first experience as a foreigner made her think about the relationship between self and others.
In order to pursue the question of her identity Hokyo changed her style from traditional Japanese painting and, in 2017, started creating works with elements of manga, reflecting her childhood interests. “Who am I?” is a major question that has been ongoing since childhood which she pursues in her current work.
When she returned to Japan in 2019, in order to explore this question further, she traced back the lines of history from ancient times, expanded her approach of making artwork from a folkloric perspective, incorporated the spirituality and nature of Japan, and drastically changed her painting materials and style once again.
Since 2020, she has been creating abstract works in mixed media using not only natural mineral pigments and Japanese paper, but also acrylics and cloisonné. Her latest work is comprised of lines drawn in large quantities reflecting the lines of human history.
Hokyo uses the elements of cloisonné enamel to harken back to her maternal ancestors, who were gunsmiths and her grandfather who was a glazier; thereby representing time from her ancestors to the present. That cloisonné was introduced to Japan across the Silk Road, through Kazakhstan, links history with her own past.
Influenced by ancient ideas and philosophies as well as current daily life, she approaches the fundamental aspects of her act of drawing and continues to pursue the universal question of the meaning of humanity.

© Tomoko Hokyo. All rights reserved. Any unauthorized reproduction, modification, reuse and republication of the articles, pictures etc. used in this site is strictly prohibited.